Looking for a cheap thrill? Ready to be thrilled playing ping pong? The STIGA Advantage offers a great way to play with maximum affordability.

A single day or evening out with the family, or even just with one other person, can cost what may feel like half a week’s salary most of the time. Nowadays, more and more of us are looking for fun, free ways to spend time together without breaking the bank.

Increasingly we are looking for ways to entertain in the comforts of our own home. The STIGA Advantage is one affordable, easy to assemble ping pong table that will bring family and friends together without hitting too heavily in the pocket 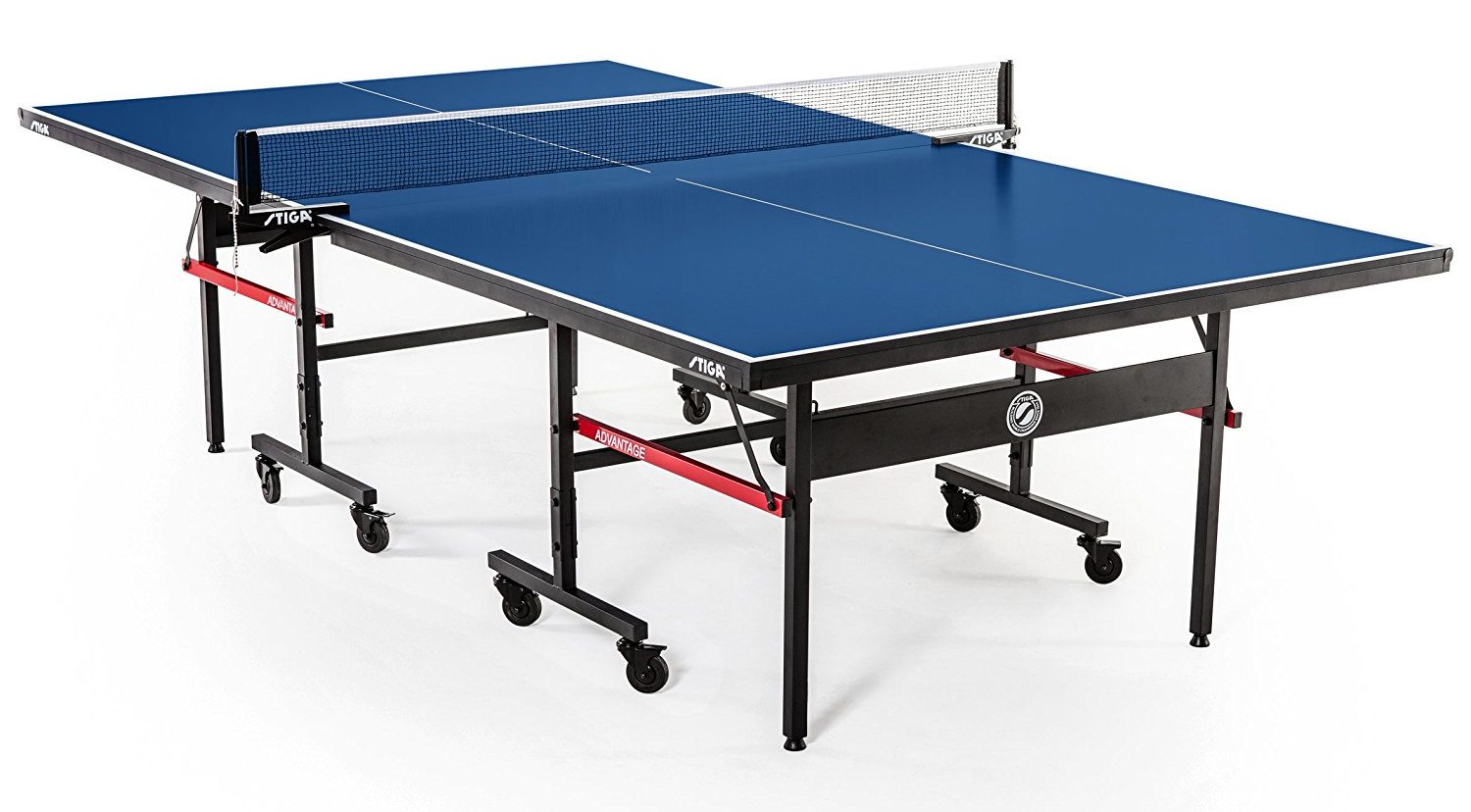 Is It Worth Your Money?

We say the answer to this question is one big resounding yes! While the tabletop could be thicker to provide more consistent play, the rest of the table is well constructed and appropriately priced.

This is a recreational table, which means the focus is more on the storability and convenience of the table over the ultimate competitive playability. And STIGA’s focus is right on point with this table. For the price you pay you’ll get an amazing level of convenience with its separable halves, locking features, and safety mechanisms.

So, what makes this table such an excellent choice? STIGA has put the value in just the right places with the ultimate recreational audience in mind. They chose to save money on the tabletop knowing the typical player enjoying this type of table will be one who just wants to play for the fun of it, someone who isn’t out to become the next ping pong superstar. 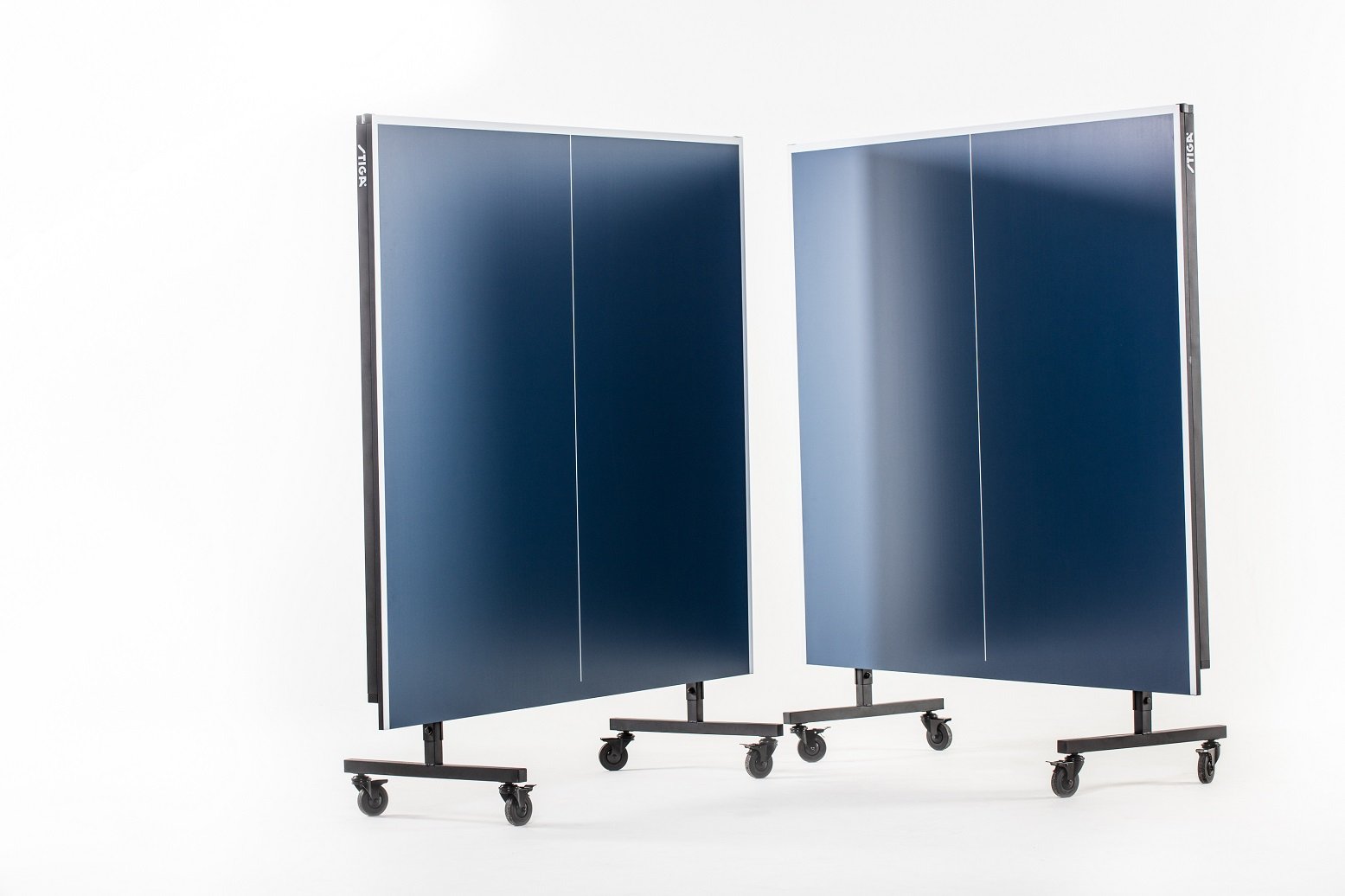 One of the best features of the STIGA Advantage is the completely separable halves. Two halves means you can easily set it up to play a round of ping pong by yourself by setting one half vertically up against the other half.

It also means this table is ready for easy storage, since both halves will neatly nest into each other. And, in case you need extra table space for Santa’s village at Christmas, or extra plates of food at the next family reunion, you can use the separate halves for other functions. Cool, right?

Another great feature of the STIGA Advantage, particularly if you have little ones running around, is the spring loaded safety latch system. The safety latch system engages when either table half is positioned vertically, thereby preventing any spontaneous falls. So you can rest at ease that the ping pong table won’t fall down on top of you when you open the closet it’s stored in.

And, if you’re short on time, or if you’re like most of us, and detest assembling just about anything, the STIGA Advantage comes 95% already assembled. The last 5% takes under 10 minutes to put together. Compared to many other tables on the market, this convenient feature is nothing to sneeze at.

Ease Of Use & Reliability

Considering the STIGA Advantage takes 10 minutes or less to set up we’d say this table is very easy to use. This statement is backed up by the fact that the Advantage has 3” lockable casters, making the actual moving of the table pretty easy. Once you have it where you want, it won’t be going anywhere as long as the locks are engaged.

The table itself is reliable if it’s given the proper love and attention. Keep in mind, this is a ping pong table at the lower end of the price spectrum. And although it is well built, it won’t have the premium components more expensive models will have.

While STIGA has built the Advantage with quality, that quality is constrained by the range of materials available that would still guarantee a budget friendly price. That being said, its 1.5 inch square steel legs and table top reinforced by 1.5 inch steel tube aprons should provide many years of quality play time.

The advantage the STIGA Advantage has over other similarly designed competitors is price. At under $500, this particular ping pong table is quite a steal. We say that, but keep in mind – the thickness of the table is a bit thinner than the 19mm minimum we’d like to see.

As a purely recreational table though, it’s a great price for any party pad or basement table. And generally, anything less than $1000 is not going to give you a thickness greater than the 16mm the Advantage offers.

The STIGA Advantage is all about putting the fun factor into value. This table is reliable, well built; and although the table thickness isn’t great, it will provide endless hours of ping pong fun for any get together or family tournament.

Even though it’s economically priced, the STIGA Advantage still offers features normally found on higher grade tables, such as separable nesting halves, safety mechanisms, and adjustable height. Again, this is not a competitor’s table.

It is a table designed for a ping pong-ing good time. And if that’s what you’re looking for, you’ve found it in the Advantage.

Other Options Worth Looking At

If you are looking for a table with a little more thickness, something that will give you a slightly better bounce to fit your competitive edge, then take a look at the JOOLA Tour 1500. It’s the next step up in quality, and it will also step up the cost as well.

Now if you’re really cramped on space but you want a good reliable table you can play on and still put away, try a compact size recreational table. Butterfly makes a great compact table, appropriately called the Butterfly Compact Tennis table. It’s got the same thickness as the STIGA Advantage but it’s slightly smaller, fitting nicely into snug spaces.

You can also check out these awesome articles on Joola Inside and this Killerspin MyT5 Reviews.