From the handle to the blade, the Stiga Evolution is made to be lightweight, durable, and easy to control, so that any intermediate player can play at the top of their game.

Is It Worth Your Money?

Well, that depends. If you’re serious about your game, but still playing on a recreational level, then the Stiga Evolution is absolutely worth the money. The money you pay for this paddle has been put into a design focused on giving any competitive player a defensive edge. Offensive players should consider looking at other paddles.

Likewise, if you’re purely a recreational player, and you’re just looking for a decent paddle that gives you the reliability you need, don’t bother dropping the money on the Evolution. Look for something more basic. There are plenty of high quality paddles on the market that will give you moderate control, spin, and speed that you can use until you’re ready to move up to a more challenging paddle.

The Nuts & Bolts of the STIGA Evolution

So what exactly makes the Evolution so worth the money you’ll drop on it?

The material and the design.

Both are given great attention so that every detail is optimized to provide the best possible playing environment for the defensive player. 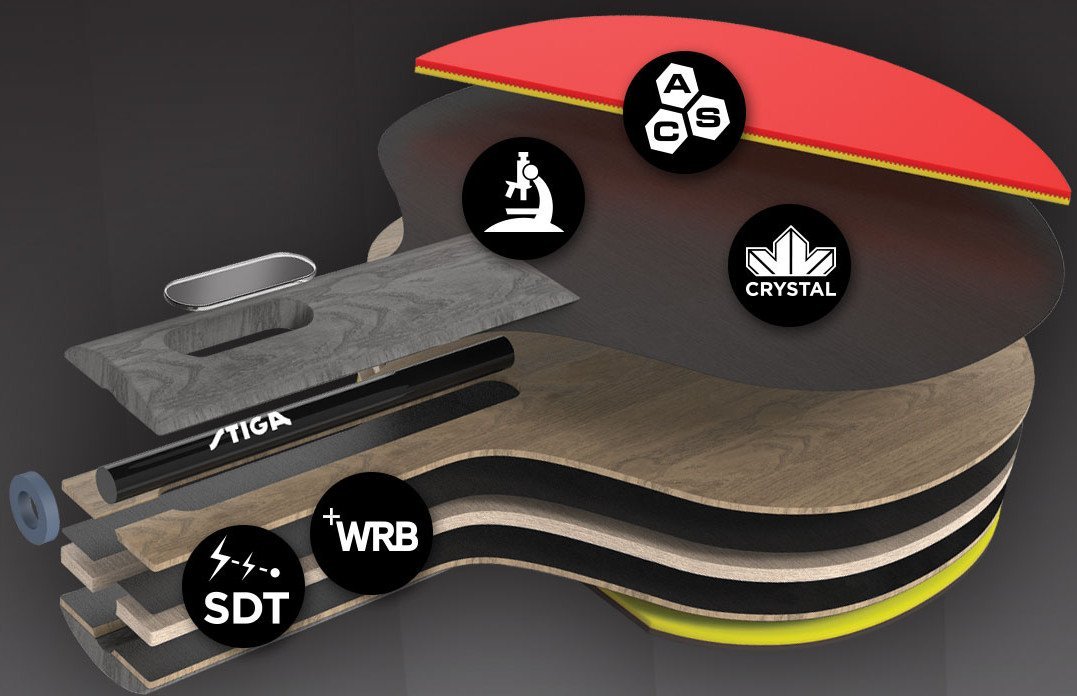 Perhaps the biggest performance based attribute in a paddle that a defensive player looks for is control. The better a player is able to control their paddle, the stronger their defensive position will be.

The Evolution offers excellent control through the design of its handle. Unlike typical table tennis paddles, the Evolution features a flared design to reduce slippage.

Also, the bottom center of the handle is bored out to increase sensitivity to strikes. So as you hold the paddle, you can feel where on the blade the ball makes contact with every strike.

Besides increased control and sensitivity of the handle, other attributes of the Evolution can be found in the paddle’s blade. The entire paddle weighs only six ounces, due to its lightweight six-ply balsa wood blade. A lighter blade means more time to recover between strikes – again aiding in the defensive position of the player.

The Evolution also features Shock Dispersion Technology (SDT), which dissipates the vibrations from ball contact to the rest of the paddle, thereby increasing paddle control and recovery. 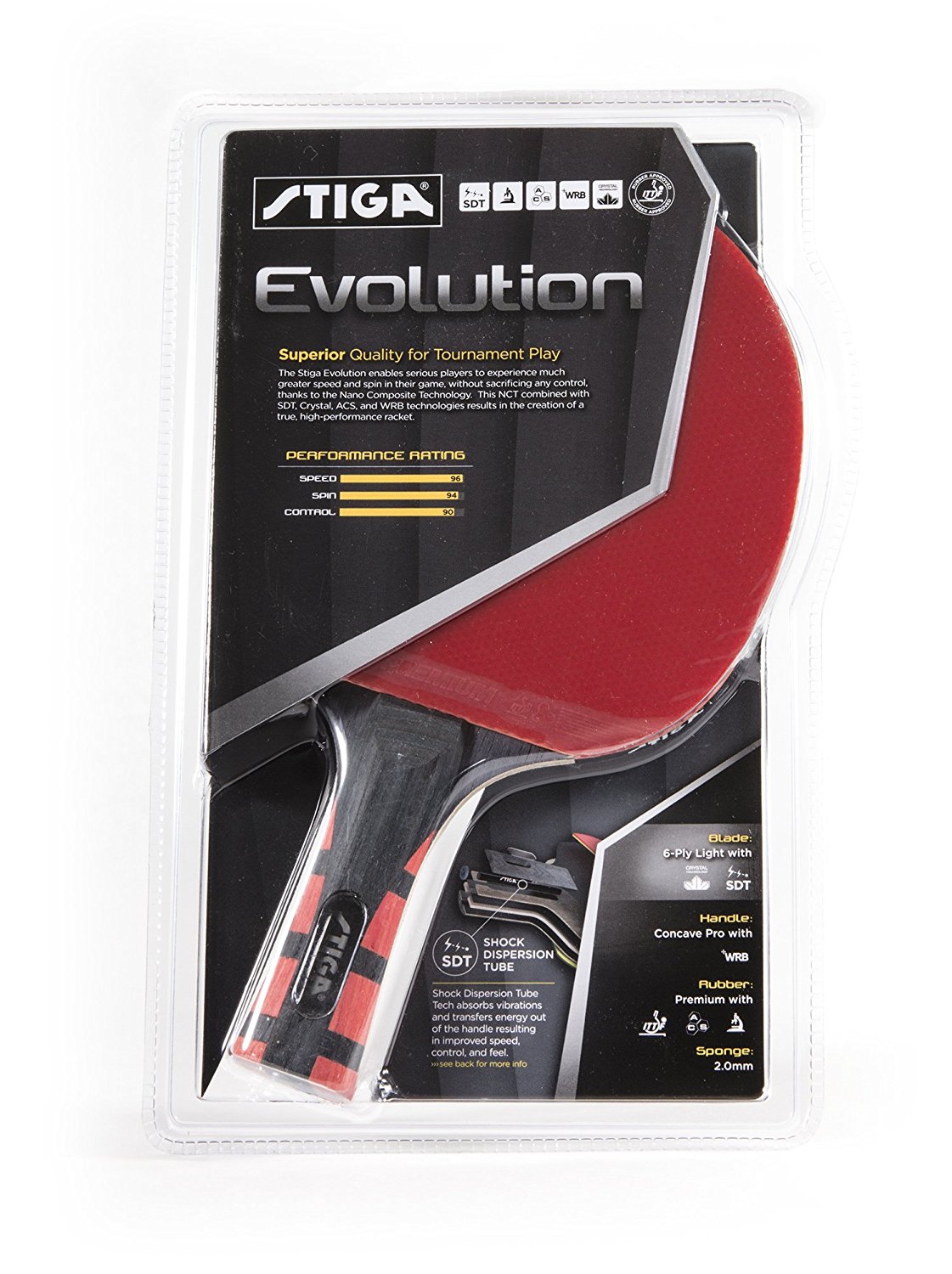 Ease Of Use & Reliability

This paddle is not easy to use. It is one finicky little guy. That being said, in the right hands it will really up your game.  Anyone looking to purchase the Evolution will need to spend some quality time with it before passing judgment. Stick with it a while, and you’ll see why it’s such a high performance paddle.

Beginners beware, you will have to spend much more time with this paddle before getting used to it. In fact, STIGA recommends that this paddle be used by intermediate recreational players at the very least,all the way up to tournament level players.

There are wonderfully well made, basic paddles out there more appropriate for the beginning player at a much lower price. So don’t be drawn to the Evolution just because it’s the best. Sometimes the best doesn’t mean it’s the best pick for you.

We’re not going to lie; the STIGA Evolution is one pricy paddle at over $50. But, you’ll be sure to get what you pay for and then some. There are a slew of other paddles on the market at a lower price point.

But, many of these paddles are meant for players on a beginner or permanent recreational level. If you’re a pretty competitive defensive style player whose gotten a little too comfortable with your current paddle’s comfort level, then the Evolution is worth every bit of your money. 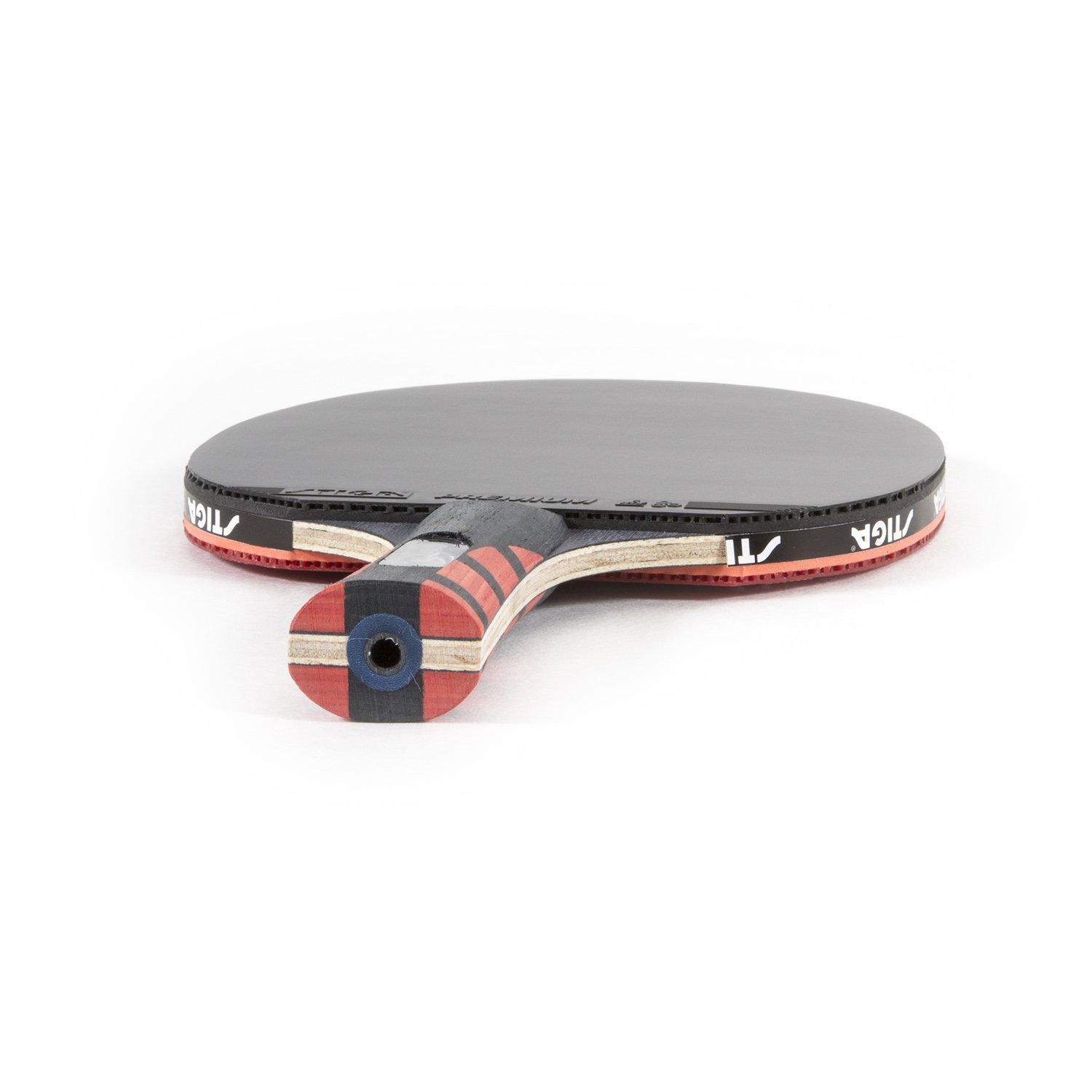 As far as premade paddles are concerned, the STIGA evolution is the closest you can get to custom made.

Be sure to keep in mind that once you start creeping up towards tournament level play you’ll want to start looking at custom paddles instead of premade ones.

But until then the Evolution will serve you well, pushing you beyond your comfort zone as a defensive player.

This paddle should not be purchased by beginners, unless they want to be completely frustrated.

The perfect partner for this paddle is the competitive recreational level player whose style is defensive.

Offensive players should be looking for a paddle that has a lower control rating with higher speed and spin ratings.

Other Options Worth Looking At

If you do happen to be one of those competitive recreational players who really enjoy an offensive style of play, we suggest the STIGA Pro Carbon paddle.

It’s got all the same features and technology of the STIGA Evolution, but it’s designed in a way that puts offensive features higher on the priority list.

If you’re just not ready for either the STIGA Evolution or the STIGA Pro Carbon, but you still want a high quality, reliable paddle that will give you adequate spin, speed, and control, take a look at the STIGA Pure Color Advance paddle.

It has a bit thinner foam, and five ply wood blade instead of six ply. But, it’s reliable and not too finicky for the solid beginner level player.